Bahrain is a small Arab constitutional monarchy in the Persian Gulf. It is an island country consisting of a small archipelago centered around Bahrain Island, situated between the Qatar peninsula and the north eastern coast of Saudi Arabia, to which it is connected by the 25 km (16 mi) King Fahd Causeway. Bahrain’s population is 1,234,571, including 666,172 non-nationals. It is 780 sq. km. in size, making it the third smallest nation in Asia after the Maldives and Singapore.

According to The Travel & Tourism Competitiveness Report 2013 of the World Economic Forum, Bahrain ranked 3rd among Arab states and 55th globally. The number of arrivals via sea, air and land reached 12.4 million in 2013, and the number of hotel guests was 1.069 million for 1.99 million tourist nights.

Attracting demand from a wide range of segments, the government has positioned Bahrain as one of the most-sought after destinations worldwide that has so much to offer and as a result Bahrain continues to be the location of choice for business professional and the pleasure seeker.

Bahrain has many touristic places and more than one hundred elegant hotels. There is a wide range of entertainment and environmental and sports activities, many historical houses to visit, as well as gardens, parks, resorts and elegant malls.

National Theatre of Bahrain is the 3rd largest theatre in the Arab world and can seat 1001 people, and lots of cinemas, national theatres, historic and cultural houses.

Bahrain International Circuit is the home of motorsport in the Middle East, and it has been hosting Formula 1 World Championship since 2004.

Check out our expertly curated local area guide by category: Manama Souk or Bab Al Bahrain Souk is a must visit for any traveller looking to snap up a shopping bargain, from Gold to templates the souk has something for everyone. Just like any traditional markets in Arab World this is a largest of the two local markets in Bahrain. Manama Souk known for its pearls and gold is located in Manama’s central business district behind the famous “Bab al-Bahrain”, marking the main entrance to the souq. The souq is like a maze of small lanes that have endless displays of goods for sale. View times and further details here. Build in the center of the city, Bahrain National Museum is a truly unique place to visit, where you will uncover 4,000 years of history through various archeological displays from the ancient Dilmun era to the fascinating agate and carnelian beads. You’ll also discover the earthenware burial jars which were used for the body as well as its chattels and learn about Bahrain’s famous pearl diving history. A trip to Bahrain is not complete without a visit to the many forts that line the area. Bahrain Fort and Arad Fort Riffa Fort make for a great day out showcasing the rich trading history and archaeological digs that surround the island. Our pick would be a visit to Qalat al-Bahrain (Bahrain Fort) listed as a world heritage site and is by far the most exciting of all Bahrain’s Forts. Attracting over 50,000 visitors annually the Tree of Life is believed to be the site for ancient rituals and cults. The tree is unique in the way it has survived over the past 400 years completely free from any water supply. Archaeologists have unearthed pottery and other artifacts in the vicinity of the tree, some of which may date back to the Dilmun civilization. A must visit during your time in Bahrain. Dating back to the Dilmun era, Barbar is a village in Bahrain consisting of three successive temples dating back to the 2nd and 3rd millennium BC. Each temple was built on platforms, designed around courtyards and thought to have been constructed to worship gods. Beneath the temples is a sunken chamber enclosing a fresh spring water, believed to be associated with Mesopotamia – God of wisdom and sweet water Enki. 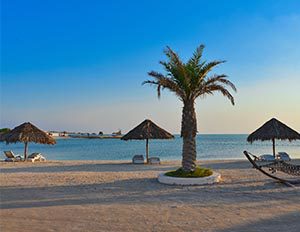 Looking for a little rest and relaxation on your trip to Bahrain? Well look no further than the Al Dar Island consisting of a north and south hideaway. Just like with most island getaways, there is loads of activates to entrain those who find it hard to sit and relax all day, or if simply doing nothing all day is your thing pull up a lounge chair beach side and get stuck right into your favourite book. Getting to the island couldn’t be easier with a short boat ride from Sitra We recommend a visit to the Al Fateh Grand Mosque during your stay so you can truly have a sense of the culture within Bahrain. One of the biggest Mosque’s in the country occupying an area of 6,500 square meters and can accommodate up to 7,000 worshippers at any one time. Daily congregational prayers, as well as Friday prayers, are held at the Mosque. A highlight of any visitor’s itinerary is a stopover at Bushido, a Japanese chic lounge and restaurant. Upon entering the grounds you will be meet with mesmerizing surrounds and a small moat that will have you feeling like you left Bahrain and landed in Japan. Open daily 12pm – 2am. Calling all motorsport fans, be sure to stop by the Bahrain International Circuit. From 6 hour racing through to formula one, this will surely get your heart racing! Set your sights on an unforgettable experience at Gravity Indoor Skydiving. Following your safety briefing, you will be thrust into what will feel like a 2-minute free-fall in on of the worlds tallest wind tunnels at a height of 12 meters.

Experience comforts at Park Regis Lotus Hotel, where the rooms, the amenities, and more all distill into an exceptional experience.